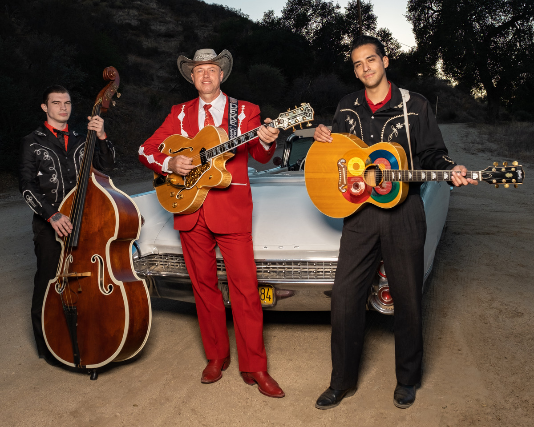 Moe's Alley presents Western Wednesday #49 with the great Deke Dickerson and The Whippersnappers - now featuring Dylan Patterson (of the Reckless Ones and The Centuries) on drums! Very special guests The Haywoods open the show. Free two-step lessons as always!

Dickerson has provided rootsy music for a slew of television shows and movie projects, including scoring the music for a Paramount Pictures film starring Johnny Knoxville, Action Point.

Dickerson has his own signature guitar, manufactured by the Hallmark Guitar Company of Maryland.

Dickerson is currently writing the official biography of guitar legend Merle Travis. He also writes for several guitar magazines and had two books published by Voyageur Press, The Strat in the Attic and The Strat in the Attic 2. Dickerson is well known as a historian of roots music and regularly contributes liner notes to reissue projects for such labels as Capitol, RCA, Bear Family, and Sundazed.

The Haywoods
The Haywoods, are a Sun Records influenced band from Santa Cruz which originally formed in the 1990's. The Haywoods write and perform original songs while giving a nod to the original artists from that Famous Studio in Memphis. The Haywoods have multiple recording credits including their own albums, Sun Studios Tribute and Film soundtrack credits. The Haywoods have shared the stage with : Big Sandy and the Fly Rite Boys ; Kim Lenz ; The Paladins ; Wayne Hancock ; Deke Dickerson to name a few.