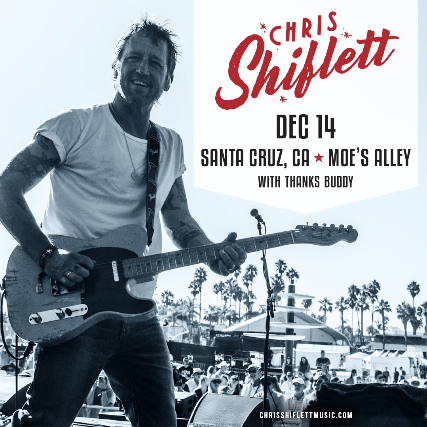 Moe's Alley proudly presents Chris Shiflett, guitarist for Foo Fighters and creator of 'Walking The Floor' podcast, on the heels of releasing his new single "Born & Raised." Thanks Buddy to open the show!

The reflective song sees Shiflett referencing his West Coast home with a country soul as he sings, “You might change but I’m-a stay the same/ Where I was born and raised.”

“My trip out to Nashville in March of 2021 was my first time recording any solo material since I made Hard Lessons,” Shiflett said in a statement. “I hadn’t done much traveling post-covid lockdown so I was a little nervous heading out there to work with a producer and roomful of musicians I didn’t really know. In true Nashville style we made our introductions and got right down to work, hammering out the basic tracks in a few hours. Vance was great and made me feel right at home, and the group of players he put together were on point.”

Thanks Buddy are friends playing for the love of it.  Rock-n-roll sprinkled with Americana, Punk and Folk.  Est. Santa Cruz, California 2013