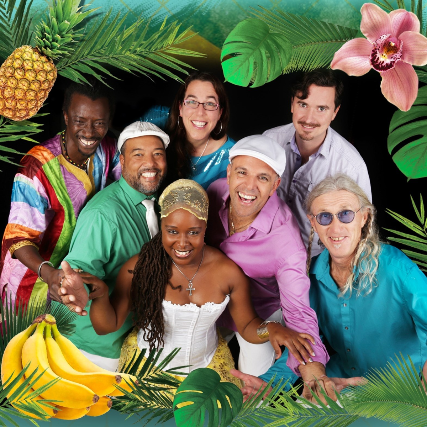 While Brazilian natives Papiba Godinho and Dandha da Hora bring their profound knowledge and respect for the roots of Afro-brazilian song and dance, the entire band has developed a type of samba-reggae-funk with a universal appeal. SambaDá musically unites the Americas, drawing from percussion based styles of South and Central America, and blends it with that good old funk and reggae back beat so familiar to crowds of North America.

For over ten years, SambaDá has been mixing contemporary sounds with the roots of brazilian culture. Papiba is a master of Capoeira, an Afro Brazilian martial art form created by Brazilian slaves, which draws on music and acrobatic movements. Dandha was born into the rich Afro Brazilian traditions of Salvador, Bahia and the Carnival Group Ile Aiye, and started her dancing career at age 6. Ile Aiye has been in the forefront of Civil Rights in Brazil, promoting equality and justice, and is widely recognized as the first Afro Brazilian BLOCO or group to perform in Brazil’s notorious Carnival celebrations.

The other members of SambaDá come from a wide range of styles, generations and sensibilities. What unites this band from such diverse backgrounds is a magic that can be felt by both the band and the audience. SambaDá brings joy to each performance, and keeps their fans asking for more!!

Los Nahuatlatos
Self-described as “Xicano Roots Fusion,” their music is a synthesis of traditional Latino styles. From Conjunto to Reggae, Chicano Soul to Cumbia and Ska, Los Nahuatlatos don’t so much straddle the line as find the groove in between worlds.

Los Nahuatlatos have been featured at the 2013 International Accordion Festival, the 32nd Annual Tejano/Conjunto Festival, NPR’s Science Friday, Houston’s East End Street Fest, and have opened for the Grammy Award winning bands Los Texmaniacs and La Santa Cecilia. Their debut album, “Tierra Sin Fin”, was released in the Spring of 2017 with their second album, “Jamás Inquietós”, released in September of 2018. Despite the various obstacles associated with the Covid-19 pandemic, Los Nahuatlatos continue to bring their music to the people and are expected to release a new album by the Spring of 2023.