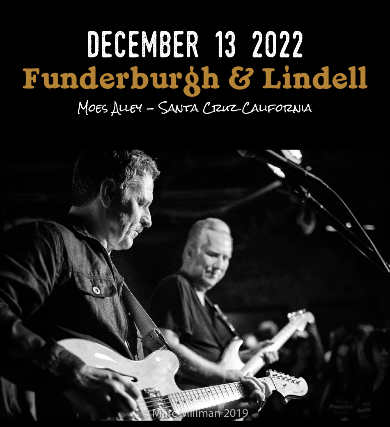 Moe's Alley is proud to present a special night with Eric Lindell and Anson Funderburgh!

ANSON FUNDERBURGH
For close to 50 years, those words pretty well sum up Funderburgh’s life and love of just being “in the moment” when he’s on stage coaxing some of the very best blues guitar sounds in the world from his Fender Stratocaster.

In the moment indeed. That’s where Funderburgh lives every day. “I’m just a simple country boy,” he says. But this is one country boy who felt the call of the blues early on and turned his love of country music into blistering blues that tell the tale of the working man. The every-day, simple man. People just like Funderburgh himself.

Funderburgh isn’t like a lot of other musicians and performers. He shuns the spotlight….  He’s not big on small talk, either. He’s more than happy to let his guitar do all the talking. And man, do people listen. At 5’9, Funderburgh is an unassuming figure. With his understated Southern manners and laid-back conversational style, it would be easy to mistake him as a wallflower.

Until he straps on his Strat.

That’s when he says all he needs to say. And people love it. From local joints in Texas to blues clubs and festivals around the world, Funderburgh has earned his reputation as one of contemporary blues music’s most relevant and esteemed guitar players with his unmistakable style, tone and sensibility.

While he takes it all in his typically mellow stride, Funderburgh is beloved and respected by fans and fellow musicians alike. Just don’t ask him to talk about himself. “I’d rather let the conversation on stage be what people remember and react to. It's the conversation without the big words. I want to play music. I want to play music that moves me and moves who I'm playing with and, hopefully, it moves the people that come to see us.”

Man, does it ever.

ERIC LINDELL
Born in San Mateo, California in 1969, Lindell spent countless hours in San Francisco, soaking up the musical sounds of the city, eventually leading him to pick up first the bass and then the guitar and harmonica. With a love of music and skateboarding, Lindell formed a few punky garage bands early on while his musical horizons expanded. He listened to the deep blues of Buddy Guy, Junior Wells, Jimmy Reed and Albert King before drifting toward the R&B sounds of The Impressions, Stevie Wonder and Donny Hathaway, soaking up the soul and learning how to craft a song.

With music on his mind, Lindell headed to New Orleans in 1999, where he quickly discovered the pulsating and dynamic roots scene. Since 2003, in addition to his own gigs, Lindell regularly joins forces with Ivan Neville, Moore and Mercurio (when time and schedules permit) and they perform to overflow crowds as Dragon Smoke. 2006's Change In The Weather delighted and surprised music fans hungry for a truly original artist. Lindell's deceptively simple sounding songs, laid back grooves and hook-laden melodies were fueled by guests including Brown, Neville and Moore.