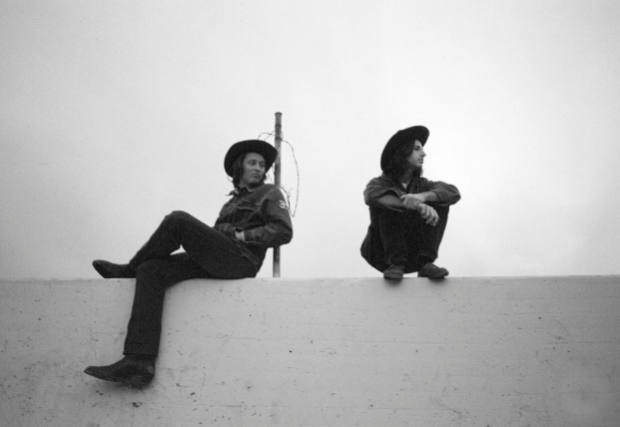 (((folkYEAH!))) presents: An evening with MAPACHE! Two sets, one acoustic, one full band.

Roscoe is a road dog. The 14-year-old Boston Terrier has been there for the whole ride of Mapache, Clay Finch and Sam Blasucci’s band, which has grown from being the casual project of two longtime buds to one of the most formidable cosmic-folk acts around. “Roscoe’s been through a lot of shit,” says Blasucci, the dog’s formal owner. “He’s been all around the country, come on tour a little bit.” With some bemused pride, Finch points out that, for a few years, he and Blasucci bunked together in a room in the Echo Park neighborhood of Los Angeles that was just big enough to fit two twin beds. “It was the two of us and the dog,” he laughs.

Naturally, Roscoe has found himself the subject of a good handful of Mapache songs in the past—and on Roscoe’s Dream, the band’s third LP of originals, he takes center stage. (That’s him in quilt form on the album cover.) “I Love My Dog” opens up the album with a blissed-out stack of acoustic guitars and a lyrical explanation of one of Roscoe’s many talents: “I love my dog / Keepin’ the policeman out.”

Just as much an easygoing trip with Gram Parsons into the desert as a mad dash with the Grateful Dead away from the law, Roscoe’s Dream is the purest distillation yet of the distinct Mapache sound, which has been brewing for many years now.
Please Note: This event is 21 and over. Any Ticket holder unable to present valid identification indicating that they are at least 21 years of age will not be admitted to this event, and will not be eligible for a refund.