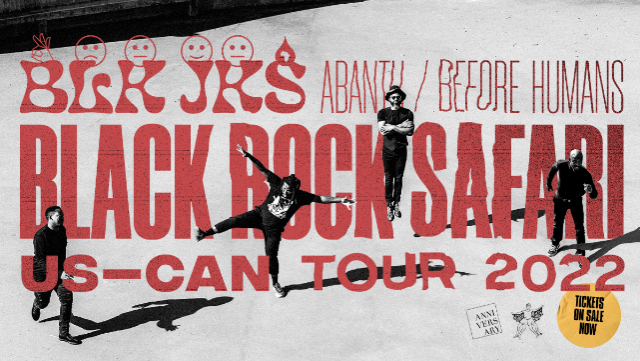 The band believes “There is a lot of important information stored and needing to be restored or preserved in this kind of narrow sonic crevice we are mining.” – Mpumelelo Mcata (guitarist).

It's this commitment to cultural activism that encodes the musical DNA of 'Abantu / Before Humans.'

The band declare as much on the new album's manifesto - we see on the vinyl cover art a text that reads: "A complete fully translated and transcribed Obsidian Rock Audio Anthology chronicling the ancient spiritual technologies and exploits of prehistoric, post-revolutionary afro bionics and sacred texts from The Great Book On Arcanum by Supernal 5th Dimension Bound 3rd Dynasty young Kushites from Azania.”

Wait up, what to make of such an arcane, unabashedly literary, sonic fiction? Simple. Back in 2009 BLK JKS had foreseen the future with 'After Robots.'

In 2021 with 'Abantu / Before Humans' this present has a fiercely retro-futuristic fresh moniker: Afropunk. These brothers just want to jam. To say BLK JKS poured gas on the fire down below or lit the flames that created the soundtrack for the nascent Afropunk movement in their home country of South Africa especially… would not be too far off the mark.

BLK JKS’s universal artistic appeal and approach to their work can be seen and felt clearly in their latest cover art collaboration with formidable fine artist Nandipha Mntambo. She is a brilliant peer and an inspired match.

To celebrate the 10yrs+ anniversary of their genre-traversing and trailblazing, award-winning debut 'After Robots,' BLK JKS are amped to announce that they are scheduled to drop their new album 'Abantu / Before Humans' through an exciting new partnership with We Are Busy Bodies (North America) and Glitterbeat Records (worldwide).
Please Note: This event is 21 and over. Any Ticket holder unable to present valid identification indicating that they are at least 21 years of age will not be admitted to this event, and will not be eligible for a refund.