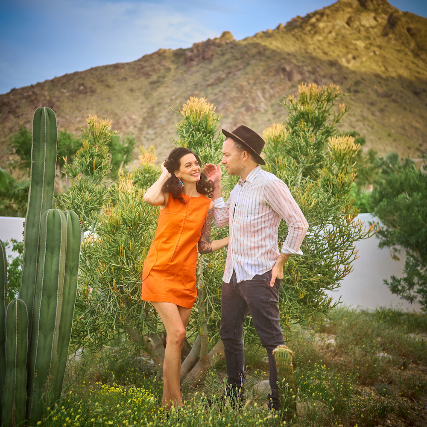 More than a missed connection, the duo that is Little Hurricane originally met via a Craigslist ad. Celeste “CC” Spina had posted a YouTube video of her drumming in the “Musicians Wanted'' section after years of dreaming of touring. Her video caught the attention of Anthony “Tone” Catalano, an audio engineer and songwriter who has recorded everyone from Neil Young to Gwen Stefani.

Tone and CC immediately vibed and within months, quit their jobs to hit the road. Starting in small clubs and coffee shops, Little Hurricane gained a dedicated fan base that led them to festival stages and sold out shows across the world.

Their sound is unapologetically authentic, combining grungy blues rock riffs alongside smashing dynamic drums with love-laden lyrics. When experienced live, the connection between the two is impalpable and hard to ignore.

The pair are also now married with two kids, which has brought an interesting influence to their otherwise relatively mature sound. In their post-pandemic return to music, Little Hurricane has reimagined a myriad of classic nursery rhymes into their dirty blues style.

With their first single, “Mockingbird,” the pair effortlessly transforms a nostalgic childhood refrain into a radio-worthy pop classic. Stay tuned for the full album, “Life is but a Dream,” release date TBA.

“…invoking elements of R&B, gospel, rock, and western influences to dust things up with a helping of soulful grit.”
– PopMatters

“…it’s impossible to deny the warmth and ease of the lyrics, vocals and music.  Rosales seems to be coming from a place of deep content and shining optimism…”
– Glide Magazine