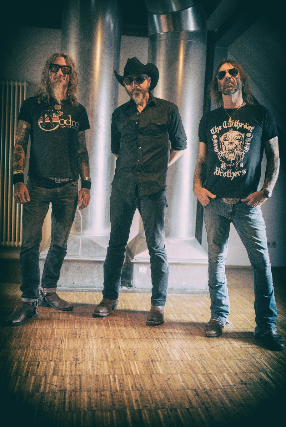 “You’ve heard our name, you’ve seen our records, our t-shirts and our stickers. We’re probably the favorite band of someone you know and yet maybe we’re still a mystery to you. Well my friend, that’s okay, you’re at the right place to get to know the greatest rock-n-roll band in the world, The Supersuckers.

And the next time you see the ‘Supersuckers’ name, whether it’s in the record store, online somewhere, or on the marquee at your local rock club, know that there’s some quality, honest, ass-kicking, hard working individuals behind it all trying to make your life a little better through the “Evil Powers Of Rock-n-Roll” (and the occasional detour into the country music, of course) and we’d love nothing better than to have you there with us as! Just remember to wear clean underwear, ‘cuz we’re gonna rock the pants right off of you!”

Thrash-and-twang duo VOLK set expectations on fire with their explosive brand of cowpunk and glam rock. Small in size yet big in sound, VOLK is Chris Lowe (electric guitar, vocals) and Eleot Reich (drums, lead vocals). Together they kick out the jams with a high-octane show combining politics, poetry, and pageantry. Their debut album, Cashville, is their first full-length release and the first to capture the full range of their cinematic style.

VOLK has come a long way since Reich and Lowe met in Berlin, Germany circa 2013 at a brothel-turned-bar called Madame Claude’s. Lowe taught at an international school; Reich was completing her theater degree; both turned to songwriting as a refuge for creativity. They ran across each other one fateful Sunday at Madame Claude’s open mic night where both were trying out their original songs, Lowe on the slide guitar, Reich belting out the blues. Their initial folksy acoustic collaboration eventually needed more—the songs were calling out for it. They added a drummer for a month, but when he split town, leaving behind a drum set in their apartment, Lowe asked Reich to give the abandoned drums a try in a moment of inspiration.

They’ve been doing the reverse White Stripes set up ever since.