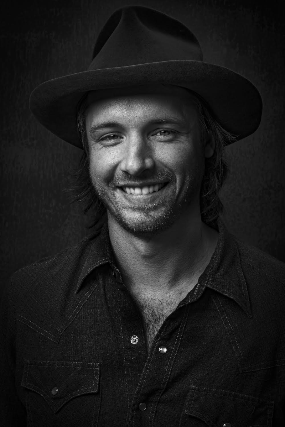 John Prine forced David Luning to drop out of college. Not at gunpoint or anything—the two had never even met—but the effect of hearing the songwriting legend's music for the first time had an equally compelling effect on Luning, who was studying film scoring at the Berklee College of Music in Boston at the time. Now an accomplished artist in his own right, Luning is preparing to release his most dynamic and gripping collection to date, 'Restless,' and he can trace it all back to one fateful night that changed everything.

"A couple of friends invited me over to share some songs at their apartment, and that was the first time I'd ever really listened to Americana music or folk or country or whatever you want to call it," remembers Luning. "They showed me John Prine, and it just resonated with me so much. I was like, 'Oh my god, this is what I have to do with my life.' I just figured it out in that moment."

Luning dropped out of school almost immediately, moved back to his native California, and devoted himself to songwriting and performing. He worked his way up through open mics to large festival performances, piecing together a band to flesh out his songs along the way and hitting the road to tour with a fierce determination. His self-released debut album, 'Just Drop On By,' garnered acclaim from both critics and fellow musicians alike, with country megastar Keith Urban hailing Luning's "staunch originality." Songs from the album landed numerous film and TV placements, most recently on NBC's 'Grimm,' and Luning's reputation for exhilarating live performances earned him dates with luminaries like Jackie Greene, Dave and Phil Alvin, and Elvin Bishop, along with a slew of festival performances up and down the West Coast.

John Courage has been honing his skills as a songwriter, guitarist and producer for over 10 years in the music communities of Northern California, with stints in the Pacific Northwest and the high desert of Santa Fe, New Mexico. With a flair for vintage inspired rock and roll that takes cue from the Texas singer songwriter scene of the 70's, John Courage creates a sound that at once feels familiar yet urgent.

New styles blossom and are assimilated into the songbook, and currently John Courage performs as a solo songwriter, or a raucous, guitar driven trio or quartet.

With four self produced full length albums to his credit, and guitar credits on many other records, along with touring work on bass and lead guitar, John Courage now expands into the role of producer with the addition of Gremlintone Studios, a fledgling analog based production focusing on live recording.