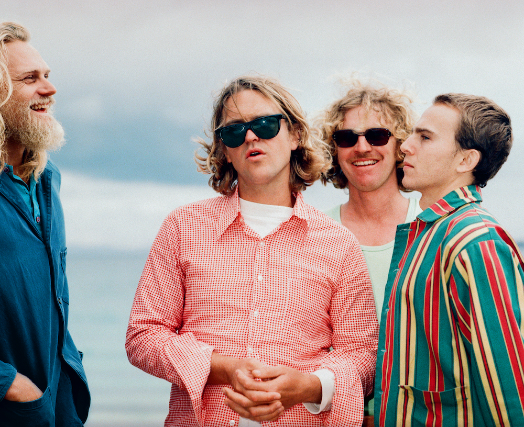 Babe Rainbow are a stoner pop band from Australia noted for their boogie psychedelia and throwback surf cult imagery.

Formed 2015 in Rainbow Bay by kiosk lurkers Jack Crowther aka Cool Breeze  Angus Dowling and Elliot O’Reilly. At a time the three worked for local grower John Cutts in Duranbah NSW near tropical fruit world. John and the guys were cranking out the kale way before it was cool. “We’ve seen plenty of vegetables go in and out of fashion” says Angus.

Babe wrote and recorded their first release “The Babe Rainbow EP” in a 2nd hand bookstore in Murwillumbah which was soon picked up by national broadcaster triple J and King Gizzard and the Lizard Wizard label Flightless Records. In 2017 they released their debut album produced by Stu Mackenzie and smacked out support tours with King Gizzard, Allah Las, Tomorrows Tulips, and French synth wave band La Femme internationally.

The debut Babe Rainbow album was signed to 30th Century / Columbia. The “Double Rainbow” (2018) followed and then “Today” (2019). Wollongong surfer Miles Myjavec joined on drums around this time. Babe Rainbow now own all their masters and future releases including album four 'Changing Colours' which was the first on the bands own label EUREKA! Music through AWAL.

“Psych-pop constructed with a painterly touch, Babe Rainbow seem to thrive on feeling, unhooking themselves from logical realms and embarking on lengthy journeys across turbulent inner oceans." - CLASH

“Their sound washes over you like the waves of the sea, a perfect groove for summer on the beach“  - Daily Express Scotland ★★★★

"Lovers of sun-kissed sonic balms rejoice: this is an album filled with slow-paced sweetness that will turn your sense of time into a hazy concept.” - Shindig ★★★★

Did it even happen?
Was I inside?
An exploding exit pearl
Looking up
The sun shines
through my lids
A guiding light,
a warm embrace
As transcendent as
...seventies tuberide