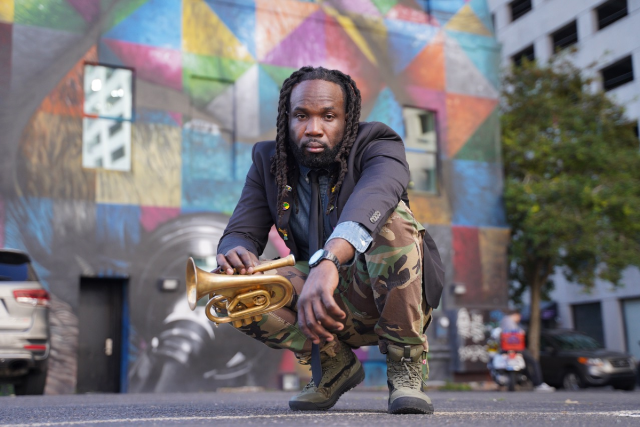 SHAMARR ALLEN
Shamarr Allen is the definition of New Orleans! Hailing from the Lower 9th Ward of New Orleans, Allen has influences in jazz, hip-hop, rock, funk rhythms, blues and country. He is the lead vocalist and trumpeter of his band “Shamarr Allen & The Underdawgs.” In addition to performing with his band, Allen has collaborated with many renowned artists around the world such as Willie Nelson, Patti LaBelle, Galatic, Harrick Connick Jr, and Lenny Kravitz, to name a few. He is a sought after artist for festivals and venues around the world. In addition to displaying his skills on the front-line as a lead performer, Allen is also a music composer, writer, and producer. With a scintillating and unique sound, look, and exemplary talents, Shamarr Allen transcends musical boundaries. He is THE True Orleans experience!

Mysterious as they are funky, The Olmecs are a group of four talented musicians who come from wildly different musical backgrounds to bring you rare grooves from the golden age of soul as well as funky hard hitters and original dance floor burners.

The members of The Olmecs have been in the Bay Area music scene for over thirty years, sharing the stage with notable artists such as Salvador Santana, Jungle Fire, Grant Green Jr. and Mike Clark from Herbie Hancock’s legendary Headhunters.