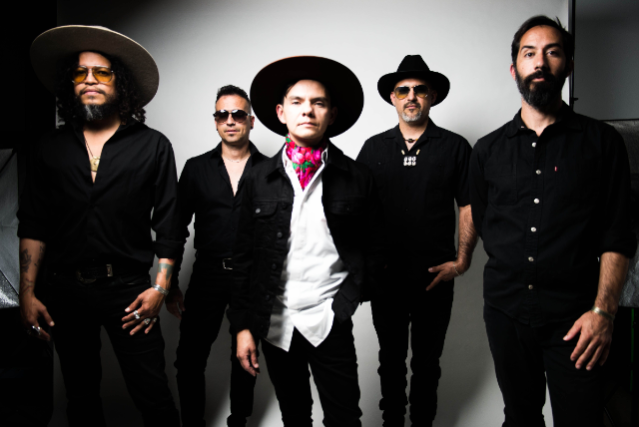 Moe's Alley proudly presents Dos Santos as they tour on their highly-anticipated album, City of Mirrors!

DOS SANTOS have released their highly-anticipated album, City of Mirrors.

“City of Mirrors . . . reflects a band convinced that artistic ideas and political ones are not necessarily at odds, but different sides of the same truth.” — Pitchfork

“A sweeping epic of Latin American rhythms and borderland poetry . . . The album is a loving melange of tradition, spirituality, and odes to a Latinx diaspora…” — Bandcamp

“Dos Santos create their own tales of freedom and unity with a dazzling technicality . . . City of Mirrors is an album to be enjoyed for years to come, passed on for generations, like the songs of our ancestors’ triumphs and hardships.” — Paste Magazine

Cinematic in its journey, the album reflects sounds from across the Americas combined with compelling poetic narratives. Its 13 tracks consolidate the band’s unique identities, creative and cultural roots, and their penchant for honoring traditional Latinx music with contemporary compositional expressions and production techniques. It achieves the band’s mission to push against their own musical boundaries while also exploring themes of social justice, migration, and contemporary human struggle. Chavez articulates beautifully: “City of Mirrors is an assemblage…glimpses of tradition… reflections on our collective present… luminous echoes between love and solitude, hope and absurdity, euphoria and mourning. This album grapples with and transgresses these binaries because we have/and continue to cross borders. Yet, for us, the border is no metaphor—too much real staring back at us. We embody the border. We (our families) have crossed it. We (our stories) are coated with its residues. And so… we cross the border of self through our art – out of necessity.”

LOS TILICHES (The Junk)
The 3 piece band of Hermanos keeps on making their unique musical noise fusion of rock, ska, reggae, and blues, with a hint of their Latin roots. Their bilingual lyrical harmonies, and catchy lyrics, transport you through experiences of life and its many turns of love, Fun, sadness, and much more. Los Tiliches, made up of Mario (Guitar/Lead Vocals), Ricardo (Drums/vocals) & William (Bass/vocal) has performed and shared their music all over the U.S. performing and sharing the stage with many acts in big cities such as New York, Chicago, Texas, Seattle, Atlanta, Las Vegas, Los Angeles, San Francisco, San Jose, and many other fun little cities in between.