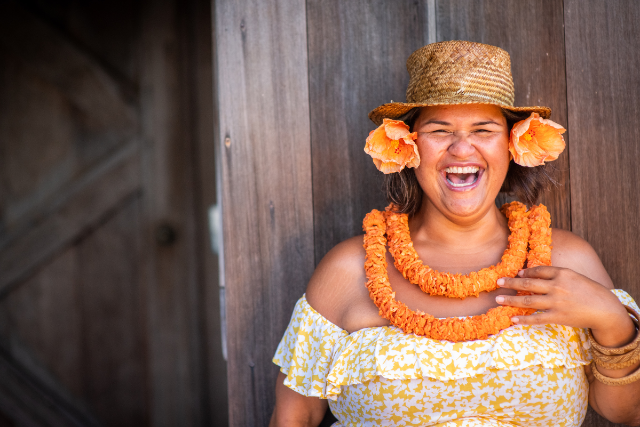 “She possesses an uncommonly gorgeous voice and holds notes that wrap around a listener like a mother’s embrace.” — Variety

Exquisite vocals, powerful lyrics and gorgeous melodies have earned Paula widespread critical praise and an incredibly dedicated fan base. She is complex, intelligent and real, her songwriting and performances filled with depth and passion. It is almost impossible to peg her into one genre — with a beautiful disposition, sweet island vibes and Jawaiian roots reggae in the mix, her music has been called modern Hawaiian soul. She is praised for her deep intensity and emotion with a personal style that is widely appealing, endearing audiences to her around the world.

Her first release Lilikoi earned her the Na Hoku Award (Hawai‘i’s “Grammy”) for Most Promising Artist of the Year in 2007. A blend of tradition and evolution, her music features soul and jazz–infused lyrics, seamlessly mixing English and Hawaiian languages, supported by traditional Hawaiian instruments like the nose flute and ‘ukulele, and an engaging voice that makes immediate connection with audiences.

At an early age, she faced the vulnerabilities of living homeless on the beaches of Hawai‘i, seeing the destruction caused by drugs and violence. Fuga began with poetry as a platform to express her experiences, and blossomed into a songwriter when she began playing ‘ukulele in high school. She is one of four performers in Hawai‘i (with Jake Shimabukuro, John Cruz, and Alfre Woodard) in the Turnaround Arts program of the Hawaii Arts Alliance in partnership with Kennedy Center in Washington DC.

She has toured extensively with Jack Johnson, and recorded with reggae royalty Ziggy Marley – both are featured on her EP release Misery’s End. Paula dedicates much of herself inspiring the youth across the world, sharing her story of perseverance and hope. She is an artist on a mission and music is her vehicle. In 2019, she was selected for a  coveted Juried Showcase spot at the Western Arts Alliance (WAA) conference. During the pandemic, Paula focused her attention on her much-anticipated second full-length album, Rain on Sunday, which is her debut album on Jack Johnson’s own Brushfire Records and Republic Records, due for a June 2021 release.

Says Paula: “We want to take Hawaii to the world, show the aloha spirit to the world, loving and welcoming and inviting. We’re all connected by one ocean, even though it has many names, we’re all on this one earth.”