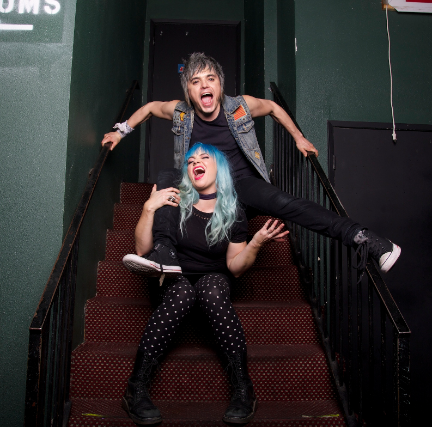 Moe's Alley is proud to present a punk rock night with The Dollyrots, Year of The Fist and West Cült​!

The Dollyrots
When you’ve been a band long enough to release seven albums, play two thousand shows, work with Joan Je:, perform live on The Price Is Right, and give birth to two children who are now old enough for guitar lessons, some of your coolest material will inevitably fall through the cracks. The Dollyrots dug into their vault and pulled out twenty four pop-punk gems for their new album, Down The Rabbit Hole.

A collection of rare B-sides, unheard alternate takes, and adrenalized cover tunes, Down The Rabbit Hole is a showcase of The Dollyrots’ unique creative process and a fascinating survey of their influences, which range from Nirvana to The Penguins.

“We’ve always taken inspiration from a wide variety of sources,” says guitarist Luis Cabezas. “Whether it’s punk or Motown or ‘80s pop, we’re just music lovers. It all goes into a big blender and whatever comes out, that’s The Dollyrots. And I think this album will give our fans a window into that process.”

Bassist / vocalist Kelly Ogden is excited for many of the never-before-heard tracks to finally have a home. As she points out: “Sometimes a song just doesn’t fit on an album, but that doesn’t mean it isn’t a great song!”

It’s a career well worth looking back on. The Dollyrots have released albums on Panic Bu:on/Lookout and Joan Jett’s Blackheart Records, and are now working with Little Stevie Van Zandt’s Wicked Cool Records. They’ve hit the Billboard Heatseekers chart multiple times, they’ve been featured in movies and TV shows, they’ve shared stages with some of punk’s biggest names, and they once baked several hundred cookies for all the fans that crowdfunded one of their albums. Kelly is currently the host of the Sunrise Surprise radio show on SiriusXM’s Underground Garage, and Kelly and Luis are both already hard at work on a new album to be released in 2023. This year’s upcoming USA tour dates cap off a year that also featured the band supporting friends Bowling For Soup with Lit in the UK, along a headlining run of the Midwest.

Year Of The Fist
Year Of The Fist reaches from Oakland, California where there has been no shortage of great musicians and bands to play with or catch live on any night of the week. In 2011 these four friends found themselves in a position to play in the same band instead of different ones. Together their musical backgrounds span all genres, but all have the love for rock and roll.

West Cült
West Cült is a riotous, lo-fi, post punk 3 piece out of San Francisco don’t like you. Sure they’ve got harmonious dual vocals and an unprocessed simplicity to their belligerent chaos; but they for sure don’t wanna be your friend or whatever.

Members of the Custom Kicks, Dirty Denim and Fin Del Mundo.
Please Note: This event is 21 and over. Any Ticket holder unable to present valid identification indicating that they are at least 21 years of age will not be admitted to this event, and will not be eligible for a refund.