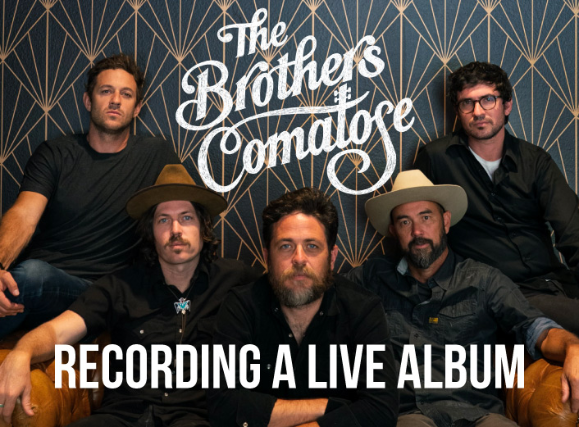 The Brothers Comatose is a five-piece string band from California who make songs deeply rooted in this country’s past — traditional bluegrass, country and rock ‘n’ roll — with a contemporary spirit of experimentation, and an eye toward expanding Americana’s future.

Founded in 2009 by Petaluma-born brothers Ben and Alex Morrison (vocals, guitar and banjo) and their classically trained friend Philip Brezina (violin), the band has built an international following based on their warm, resonant songwriting, rowdy live shows, and an impressively relentless touring schedule.

When It All Falls Apart, out in the spring of 2022 on Swamp Jam Records, is the sixth full-length from the Brothers Comatose. It finds the band at a crossroads: in the midst of lineup changes, the pandemic shut down the music industry, and the band was forced to find ways to connect with fans that didn’t involve their famously engaging live shows.
The result is a record about unexpected endings and fresh starts. By turns poignant, painful, passionate and joyful — singer Ben Morrison also became a father during the pandemic, and got to spend time at home with his wife and new daughter — these songs also capture the thrill of the band physically reuniting for the first time after months apart.

Following the release of When It All Falls Apart, the band is looking forward to touring and reconnecting with fans in person, as well as introducing new members Steve Height and Greg Fleischut, experimenting with different forms of media and more unexpected collaborators — and continuing to explore the possibilities that come with not playing 120 shows a year.

“We didn’t know what we were going to do moving forward,” says the songwriter, of the pandemic as a reset. “But it turns out, when it all falls apart, you figure your shit out and you find a new path.”

WOLF JETT
The sound of Wolf Jett will make you dance, sing, and possibly even howl! Its roots run deep through the soul and help heal the heaviness of life. Their music is a celebration of perseverance, infusing folk, blues and americana into what can only be described as "Cosmic Mountain Music.” Frontman Chris Jones (Scary Little Friends) was born in the south and raised in CA, His songs combine the best of both worlds to create a vibe that is fresh, yet immediately familiar to a broad audience. He is joined by long-time musical collaborator Jon Payne (Elliott Peck, The Painted Horses) on drums, Jeff Kissell (Marty O’Reilly and the OSO) on bass, Will Fourt (McCoy Tyler Band) on dobro/guitar and debuting Laura T. Lewis on vocals/percussion, while occasionally featuring Alex Jordan (Midnight North) on keys to boot.
Please Note: This event is 21 and over. Any Ticket holder unable to present valid identification indicating that they are at least 21 years of age will not be admitted to this event, and will not be eligible for a refund.