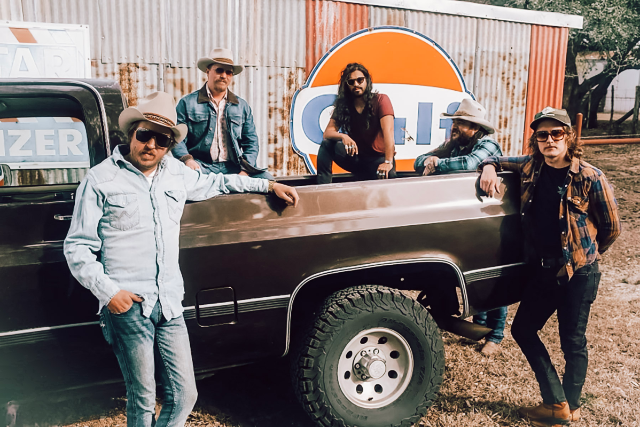 Moe's Alley is proud to bring back an internationally-acclaimed country band out of the Lone Star State, Mike And The Moonpies with special guest Rob Leines!

MIKE AND THE MOONPIES
Once celebrated as Austin's premiere dancehall band — with popular residencies at local institutions like The Hole In the Wall, Broken Spoke and the White Horse to match — the Moonpies have spent years expanding their reach far beyond the Lone Star State. Geographically, they'll always be a Texas band. Musically, they've grown into much more than that, having traded the two-steppin' twang of their earlier years for a diverse sound that's both fresh and familiar. That sound has earned the group an international following, and it was during a European tour that the bulk of Cheap Silver and Solid Country Gold was created — in the same world-renowned, London-area recording studio where the Beatles recorded Sgt. Pepper's Lonely Hearts Club Bandand Pink Floyd tracked Dark Side of the Moon, no less.

It's been more than a decade since Mike and the Moonpies launched their career, initially paying their dues as a versatile cover band with a catalog of 300 songs. Cheap Silver and Solid Country Gold nods to those woodshedding days — not only in the album's title track, where Harmeierraises a drink and sings, "Here's to another night of paying our dues," but also in the album's handful of cover songs. The boys resurrect the twangy spirit of their dancehall days with "If You Want A Fool Around," written by Billy Troy and BennieBoling, and also put their own stamp on Aaron Sinclair's "Young in Love." Those covers serve as a tip-of-the-hat to the band's roots, while also demonstrating that the Moonpies' own songs pack just as much punch as the songs of their heroes. Harmeier and company haven't forgotten about their bar-band beginnings, but these days, they're more interested in creating their own gold.

"Won't find me on the radio, no late-night TV show / You'll find us in a smokey bar somewhere on the go," he sings in "Rock & Roll Honky Tonk Life," a celebration of the roll-up-your-sleeves work ethic that's steered his entire career. A longtime welder who spent years working in the oil and gas industries along the Pacific Coast, followed by a traveling gig repairing components of turbine engines at power plants across the world, Leines understands the value of long days and hard work. Blood Sweat and Beers is the product of that same perseverance, written and recorded after his long climb from the dive bars of California where Leines played some of his earliest shows, giving up his metalworking gig in order to pull triple-duty as the frontman, lead guitarist, and booking agent of his own power trio to cross-country gigs, national acclaim, opening slots for country legends like Dwight Yoakam and Whiskey Myers.