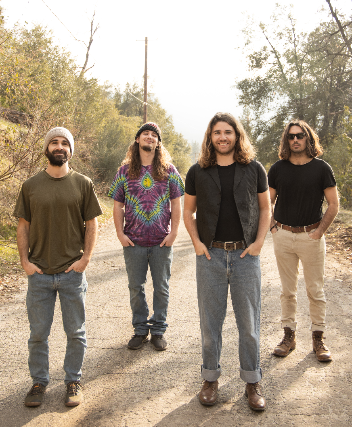 Moe's Alley is proud to bring back Superblume with new supergroup Croctopus!

SUPERBLUME is a funky, booty-shanking jam band blossoming in Santa Cruz, California. With desire to inspire a world where everybody is free to be themselves, Superblume creates a live atmosphere of love, togetherness, and self-expression.
Drawing inspiration from jam band giants and blues legends, Superblume's music weaves a wide range of improvised soundscapes through funky original compositions. Freely flowing from blissful rock n' roll to dark psychedelia to disco-funk and all spaces in between, Superblume aims to explore uncharted musical territory with every live performance.
"We want to take this crazy world and shake everyone into the moment together" says frontman Nate Smith. "One of the most beautiful experiences is when humans gather together to celebrate life and love and each other. The fear and the barriers and attachments that keep us separated fade away, and whats left is a magical moment of human connection. We want to create these moments every time we get on stage."
The seeds of Superblume were planted in 2019 when guitarist Nate Smith and drummer Taylor Brougham met at a jam session of Santa Cruz musicians. The pair immediately connected as friends and musical accomplices, as they shared the desire to create something new, explore, and bring people together. They began writing song after song, and were soon joined by the shredder guitarist Jesse Glick, and the groove master bassist Tommy Ohlman. In the dark days of the COVID-19 Pandemic, the seeds started to sprout. With no live music being allowed, the band was given the gift of time to focus on songwriting and jamming. As the restrictions eased, Superblume was ready to show their colors. They hit the ground running in 2021, playing over 20 rocking shows during the summer, including an awesome dance party for sold out crowd at Moes Alley! In their short time as a band, Superblume has already developed a loyal local following, consistently drawing 200+ people to their shows. Now they are ready to blossom and share their love and music all over the country.