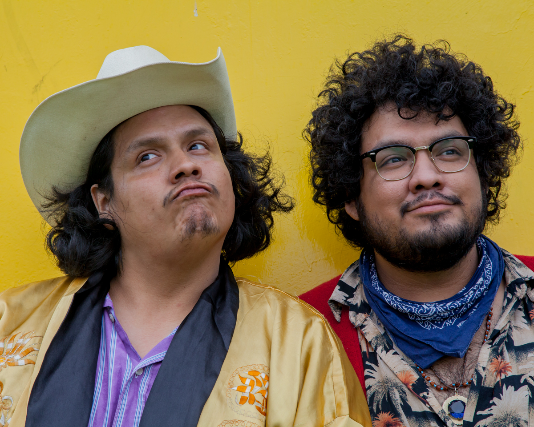 “Invigorating”, “brilliant”, and “charismatic” are just a slew of the adjectives used to
describe Tropa Magica. “The East L.A. duo made a name for themselves by combining
alternative, grunge, and psychedelic rock with cumbia” -Spin magazine.

Having toured nationally and on multiple southwest and west coast tours, they have supported established acts such as Bomba Estereo, Molotov, and comedian Felipe Esparza. The band has boldly and successfully taken on larger LA stages at venues such as The Microsoft Theater, El Rey Theater and The Hollywood Palladium.

In 2018 and 2019 Tropa Magica performed at So-Cal festival favorites Desert Daze and
Tropicalia. At the end of 2019 the band self released a limited edition 7inch vinyl EP “Smells Like Cumbia” featuring Nirvana songs as cumbia renditions.

Despite the pandemic, 2020 has been a fruitful year for the band. They wrote and recorded the theme song for comedian Felipe Esparza’s new Netflix special and collaborated with the notorious Foo’s Gone Wild on the “Foo Files Cumbia” track released earlier this year. The band has partnered up as ambassadors with 805/Firestone Beer and is sponsored by Fender guitars and Ernie Ball.

“...The psychedelic cumbia-punk that David and Rene Pacheco have pieced together over a decade as Tropa Magica has coalesced into something sublime on their sophomore album” -Grimy Goods

“They’ve spread their wings sonically while losing none of the charisma that made them a hot item at festivals...Tropa Magica’s new album, while born in East L.A., will truly be a child of the world.” -Buzzbands LA

Tropa Magica has a short documentary that introduces the band nationallyon the well known media and news company “BESE”.

¿Qiensave?
¿Qiensave? (Quien-Sa-Be) is a Cumbia Urbana group from Salinas, California with roots stretching back to Michoacán, Mexico.  ¿Qiensave? creates high-energy dance music that has fortunately blessed the band with the opportunity to perform throughout California, Arizona, Mexico and Colombia. While ¿Qiensave? has existed as a musical entity since 2009. Within the last few years, the band has picked up steam through touring, releasing their album “Mujer” in 2019.