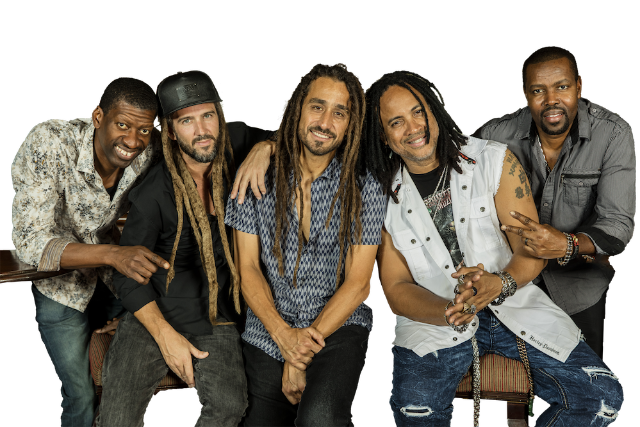 Moe's Alley proudly presents the reggae icons behind one of the most popular love songs worldwide ("Baby I Love Your Way"), Big Mountain with Rise Up!

BIG MOUNTAIN
Big Mountain first hit the charts in 1992 with the song “Touch My Light”, a song from their debut album Wake Up. Following “Touch My Light”, Big Mountain released “Baby, I Love Your Way”, written by Peter Frampton, which has become one of the most well known love songs and mega commercial hits of all times. It has stayed on the top of the worldwide recurrent radio playlists for over 25 years.

The band appeared at both the 1994 and 1995 Reggae Sunsplash festivals in Jamaica. In 1998 Jamaican drummer/producer Paul "Groove Galore" Kastick replaced Carlton "Santa" Davis as full-time drummer and primary producer in the group. Kastick spearheaded the production on the next six Big Mountain albums, spanning from 1998 and 2007. After 10 consecutive years of touring, Big Mountain decided to take a break in 2005. In May 2016 the band released their first album in 14 years, Perfect Summer. In 2022 a new album has just been completed titled Freedom. Freedom was recorded in Kingston, Jamaica at The Anchor Studios with Big Mountain and family members featuring Sly & Robbie and Chinna Smith amongst others.

Rise Up is a 5-piece Reggae band from California that was originally started in 2016 by founding members Chris Alcantara (vocals/rhythm guitar) and Alex Cortez (Drums). After gigging around the West Coast for a couple of years, the vision began to take real shape in 2019 with the additions of veteran Reggae players Rich Mihalek (bass) and Leland Smith (lead guitar/melodica). Rise Up recorded their debut EP “Lion Roar” at Imperial Sound Studios with EN Young (Nov. 2019) and added the talents of Danny Aledo (keyboards) to the band shortly after. The band then released two singles independently in 2020 with Empress Vibe and Newsman both recorded and produced by Rise Up’s own Leland Smith. They went back to the well with EN Young in 2021 and released a 5-song album titled “The Pursuit” in March. They followed it up with the independently released Dub album “Smoke Break-Rise Up Meets Jahmadeus” in April. Rise Up has had the honor of sharing stages in the past with such Reggae legends as The Meditations, Wailing Souls, Half Pint as well current artists in the genre such as Arise Roots, Marlon Asher, Sensi Trails, Josh Heinrichs and more. The band looks forward to bringing its brand of powerful Roots Rock Reggae back live to the people in 2022!