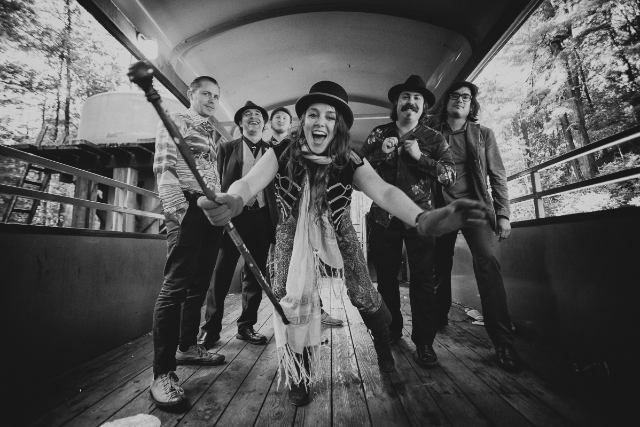 
ROYAL JELLY JIVE
“San Francisco Soul” is the best term Royal Jelly Jive can find in describing their unique and intoxicating sound. Led by dynamic front-woman Jaleh, this sultry sextet rocks into uncharted musical territories with their infectious blend of modern and throwback sensibilities. Armed with retro horns, heavy grooves, and catchy songs that are impossible to resist, RJJ can pair with your fancy cocktail at a smoky jazz club and shake up the funkiest dance party.

Born out of Funk and Happenstance at John Lee Hooker's Boom Boom Room in San Francisco, Royal Jelly Jive has gone full-steam ahead in embracing music as their truest calling. From prominent festival stages all along the West Coast, East Coast and U.K., they continue to sweep crowds off their feet with a high energy live show that leaves crowds yelling for Mo’ JELLY! Tour highlights include sharing stages with The Roots, Michael Franti, Lake Street Dive, Thievery Corporation and Avett Brothers, as well prominent slots at festivals such as Napa Valley’s Bottlerock, Portland Waterfront Blues Fest and Outside Lands. The future is Jelly.


JALEH AND THE SPELLS
With her sultry voice and intoxicating stage persona, Jaleh creates music that is as bewitching as the artist herself. She’s an old soul who casts spells of love and badassery to all that see her perform.

Inspired by 1960's psychedelic soul, blues, jazz and pop, her musical influences are as eclectic as her style. After rocketing into the San Francisco music scene with her band Royal Jelly Jive, she quickly found herself hitting career highlights such as playing Bottlerock, Outside Lands, The Fillmore, as well as opening for The Roots, Michael Franti, Thievery Corporation, the Avett Brothers and Lake Street Dive.

Once touring halted due to the 2020 pandemic, Jaleh finally found time to hone her magic as a solo artist. Luckily she had a dream studio in her backyard filled with vintage instruments ready to go! Her sound blossomed quickly, and with the help of producer Jesse Lemme Adams she created several albums worth of exciting new music and videos. They are releasing a song from those sessions on every full moon, with their new label called Moonshade Records.

Her electric live show is the culmination of those recordings and the fearlessness to create magic without holding back. It’s a buzzing sentiment she lives by both on and off stage. Catch her and her hot new backing band "The Spells" in a city near you!