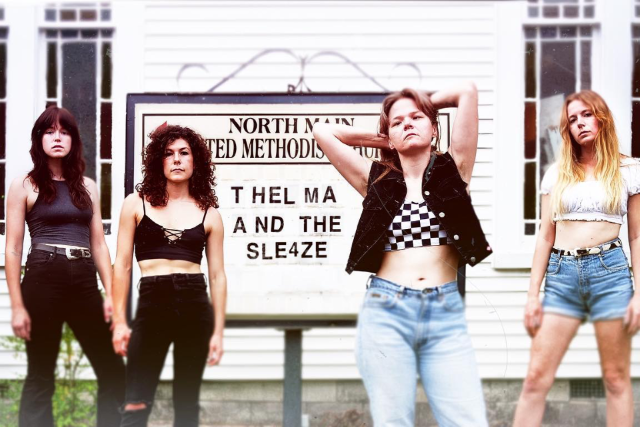 Moe's Alley presents a face melting night of hard rock with Thelma And The Sleaze and The Bad Light!

THELMA AND THE SLEAZE

LG is the embodiment of hustle. As the driving force behind Thelma and The Sleaze, she is the songwriter, the visionary, the take-no-shit-from-anyone front woman that is single handedly keeping rock and roll alive. Thelma and The Sleaze has been touring the US for years building a legion of fans, affectionally called her creepers. The growing social media presence, the hit podcast, the features with Yamaha Guitars are really all the result of her incredible songwriting, visceral guitar playing, and the guts to deliver on her vision of what Rock and Roll should be. The people have noticed - having pre-
sold nearly half of the first pressing of Fuck, Marry, Kill in two days!!

Fuck, Marry, Kill is the culmination of years of breaking down, building up, and growing their sound. After the disintegration of their old line-up and pulling together new bandmates, LG has been touring with them almost nonstop with over 100 shows in 2019. One of the highlights of the tour were two sold out shows supporting Grammy Nominee Brittany Howard. Amidst all the touring, the band was able to track Fuck, Marry, Kill in Nashville, produced by LG with Mixing and Mastering by Jim Kissling in Detroit (King Tuff, Ex Hex, The Go). Inspirations for this album pull from 80's metal, Robert Palmer, Eddie Money, Depeche Mode, and early Rock and Roll.
Having performed with acts like Eagles of Death Metal, The Coathangers, Birdcloud, Burmuda Triangle, and Charles Bradley, Thelma and The Sleaze have long established themselves as one of the best touring bands out there. Having signed on to The What of Whom for the release of their next record, Fuck, Marry, Kill, they have also
released music through the likes of Burger Records and Third Man Records.

Thelma and The Sleaze has also launched two successful season of their PodcastQueen of Shit Mountain. Season two has featured legendary country singer Tanya Tucker and front woman for Alabama Shakes and solo artist Brittany Howard. Thelma and The Sleaze is busy booking their first tour of 2020 which will feature date at SXSW and a supporting slot with Shannon and The Clams.

The Bad Light
Inspired by an eclectic range of influences such as raw blues, psych, and heavy rock, The Bad Light alchemize basic elements to create a distinctive sound. In one critic’s words, they are “grounded in meditation while remaining heavy and melodic.” With Edu Cerro of Santa Fe, Argentina, on guitar/vocals, Dana Shepard of St. Johns, Newfoundland, on drums and Celeste Deruisa of Santa Cruz, California on vocals, they’re sonically rooted to each members’ respective homelands.