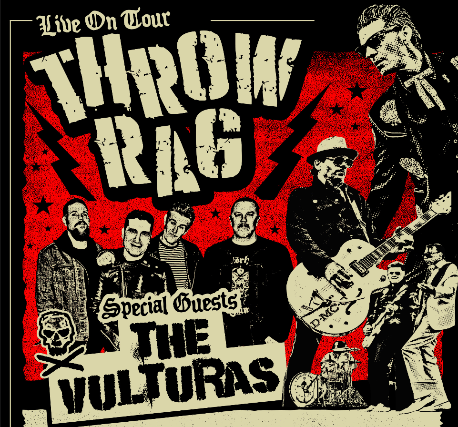 Killer punk-rock line up coming your way at Moe's!

THE VULTURAS
52 seconds—that’s how long it took for the 1st Vulturas release to sell out. 52 seconds—unbelievable. You could drop your needle on the record, and before your song of choice played through, that disc would no longer be available. Its no wonder Hostage Records is now on their 4th printing of the Vulturas debut release. Formed in October of 2018, the Vulturas began as most bands do—a cool jam project, a chance for friends Rob Milucky (Devils Brigade) and Louie “LP3” Perez III (Manic Hispanic) to get together and have fun. But you and I both know, that sometimes fun gets out of control—escalates beyond what was intended, and the boys soon found themselves crushing shows, hypnotizing crowds, and gaining hard notice—it’s hard not to, especially when the headliner just got the juice squeezed out of their audience by the greedy Vulturas.

Enemy of My Enemy
High-energy punk and rock n’ roll band from Santa Cruz, CA. Pretty much as simple as that. Catchy music that blends some of the speed and grit of punk rock with the power of rock n’ roll. Featuring members of Fury 66, Dead Set, Six Steps to Hell, Hate Brigade, Culo a Boca and Vultures at Arms Reach.
Please Note: This event is 21 and over. Any Ticket holder unable to present valid identification indicating that they are at least 21 years of age will not be admitted to this event, and will not be eligible for a refund.