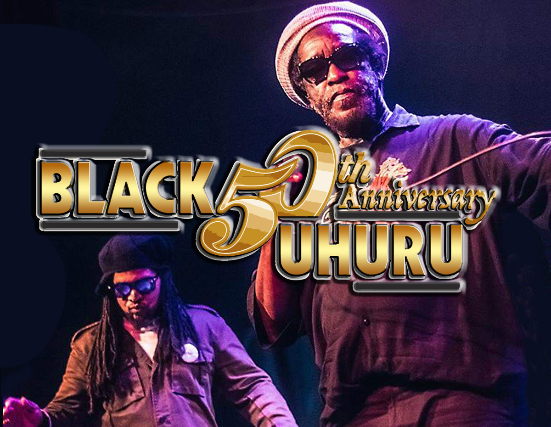 BLACK UHURU
Derrick “Duckie” Simpson the “Gong Gong Gullie” is the founder and leader for reggae’s BLACK UHURU. Although going through numerous lead singers and musicians they have remained to be one of the most recognized and prolific reggae band for over 45 years. The Group’s line up is Duckie Simpson, Andrew Bees, and Elsa Green.

The roots of BLACK UHURU were formed in Kingston Jamaica’s Waterhouse district also known as “Firehouse” in the early 60′s. Though considered to be one of Jamaica’s toughest neighbourhoods it’s home to several other reggae singers and musicians. It was where Duckie Simpson grew up and learned to sing from boyhood friends Winston “Pipe” Matthews and Lloyd “Bread” McDonald of Wailing Souls and Bob Marley. He recorded four tracks with Wailing Souls before forming his own group.

BLACK UHURU’s long success has allowed them to become ambassadors of reggae while earning several achievements in the music industry. With 14 full length albums, 7 instrumental dub albums, and 4 live albums they have the highest record sales in reggae music behind Bob Marley. The album Red was voted #23 for Rolling Stone’s list of “100 Greatest Albums of the 1980′s. Aside from winning the first reggae grammy they have been nominated 5 more times. They are the only reggae group to have won the Diamond Awards of Excellence in 1994.

Despite all of BLACK UHURU’s change of different singers and musicians the one thing that has always remained is Derrick “Duckie” Simpson. Much respect to a legendary figure for Reggae Music. The group is recently released a new album ‘As the World Turns’ which features Duckie on lead and was good for another Grammy Nomination in the category of ‘Best Album’.  You can find new Music Videos of the songs ‘Jah Guide ft. Bugle’ and ‘War Crime’ on youtube and more is to be expected of the notorious Reggae Band in the near future, stay tuned!

Ancestree
Listen to the sounds of chakras dancing to heartbeat rhythms and heavenly harmonies. Words of Love and ancient wisdom intertwine with deep bass one drops and majestic horns; Soul, Funk, Jazz, Rock, Hip Hop infused Roots Reggae. ANCESTREE draws from a deep well of spiritual inspiration creating a natural sound to move all people, inspiring one to dance with an open heart and mind.
Please Note: This event is 21 and over. Any Ticket holder unable to present valid identification indicating that they are at least 21 years of age will not be admitted to this event, and will not be eligible for a refund.