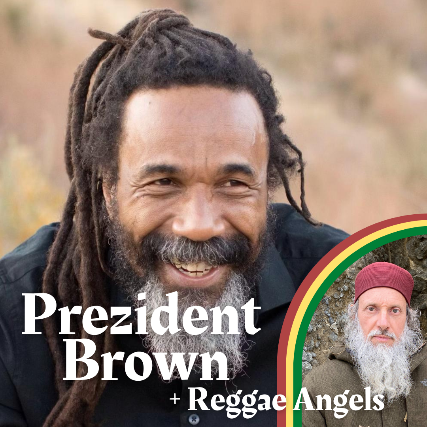 Prezident Brown, born Fitz Albert Cotterell, has been called, “one of the most interesting cultural dee-jays since U Roy”. Emphasizing positive messages, Prezident Brown has continued to pioneer his own direction, developing his own approach to dee-jaying that he calls, “The chanting stylee”. Born to a Seventh Day Adventist family in Colonel Ridge, Clarendon, Prezident Brown grew up in the small town of Oracabessa in the Parish of St. Mary, Jamaica.

He was forced to leave school at a young age when his father died leaving him with his mother and three sisters. Prezident Brown launched his musical career at the age of fourteen, when he began dee-jaying for the Sound King Stereo Mix at the Bamboo Lounge. Initially known as Junior Ranking, Prezident Brown was dubbed, “Slim Brown”, by dee-jay Nicodemus. When he recorded his debut single in 1988 Prezident Brown was named, “Dancehall Doctor”. The late Jack Ruby, producer of Burning Spear’s albums, “Marcus Garvey”, and, “Man In The Hills”, bestowed the title, “Prezident”, upon him.

In 1989, he joined Courtney Cole’s label, Roof International, and began performing and dee-jaying at the Rooftop Club in Ocho Rios. In 1990, Prezident Brown became involved with producers Barry O’Hare and Steven Stewart at Grove Music in Ocho Rios. It was Barry O’Hare’s X-Rated Record label that became Prezident Brown’s home base and it was X-Rated Records with Runn Records that launched his career in Europe. In Jamaica the X-Rated label took off as a massive roots revival swept across the country paving the way for Prezident Brown’s conscious style of reggae dee-jaying. In 1999 the Jamaican record label Kariang released the timeless, “To Jah Only” album. In 2002, Jahmani Productions released a 2 CD disc called, “Showcase Volume 1”.

He continues to record and tour. He has developed a strong following in the United States and Europe, and continues to grow musically and in notoriety, as a champion of the new roots and reality consciousness reggae movement.

The Reggae Angels are a staple in the reggae scene. They are known to deliver high energy performances with a happy sound and a universal God conscious message. Known for their live shows and their many albums, the Reggae Angels have been gracing stages for over three decades around the globe. They have performed on many major US and European festivals and they have toured extensively in North America, Hawaii, Canada and Europe and have also performed in South America and Africa. They have done five US tours backed by Sly and Robbie and the Taxi Gang and they have also toured with other legendary roots reggae artists such as Don Carlos, Marcia Griffiths, Bitty Mclean, Anthony B, Richie Spice, Mykal Rose, Luciano, The Abyssinians, Clinton Fearon, Sugar Minott, Andrew Tosh, Warrior King, Prezident Brown, Junior Reid and Frankie Paul as well as touring on their own.