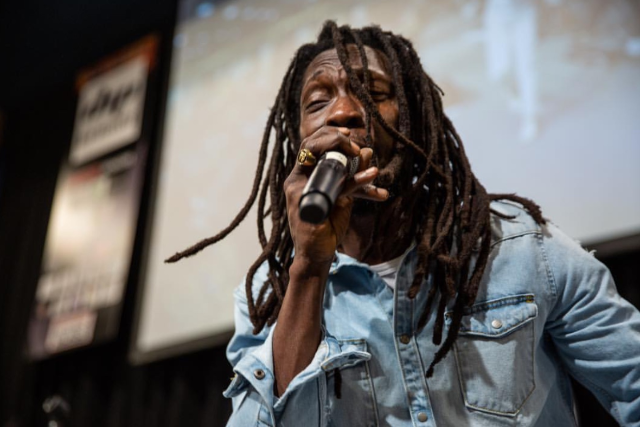 Moe's Alley is proud to present one of the realest roots reggae artists on the planet, MARLON "Ganja Farmer" ASHER plus The Rudians!

Marlon grew up in Enterprise, Trinidad & Tobago. In his youth he was a member of the Mount Ararat Spiritual Baptist Church Choir and later on he embraced the Rasta faith. Marlon Asher is a pioneer of the Trinidadian reggae movement. He has toured with other roots reggae artists such as Sizzla, Slightly Stoopid, Maxi Priest, Beenie Man, Capleton, Fortunate Youth, Pressure Busspipe, Matisyahu, Katchafire, Kottonmouth Kings and even the American R & B Sensation Boyz II Men.

In the last few years Marlon has been steadily recording. He released two billboard top ten albums in 2019, one was “Rebirth” with Vas Productions. This album includes features with Anthony B, Slightly Stoopid and Pressure Busspipe. This was his third full studio album. The other 2019 release was a various artist collaboration album called “Life Of A Ghetto Youth Chapter 2” on which Marlon did two songs. His earlier albums include “Unconditional Love” (2006), “Illusions” (2015) “Life Of A Ghetto Youth” (2017). Marlon does twelve of the eighteen songs on this collaboration album. Life of a Ghetto Youth chapter 1 and 2 raise awareness for gun violence and the hardships of Caribbean ghetto living. For this project Marlon helped raise $30,000 for victims and survivors of gun violence in Trinidad and Jamaica.

During the covid 19 shutdowns around the world, Marlon has been in the studio working on singles and his next album. The album is scheduled to be released early next year in 2022 with Vas Productions. Also in the works is “Life Of A Ghetto Youth Chapter 3” which is another collaboration album. In 2020 Marlon released two singles “Family Love” and “Use Me” which were produced by Cliff Manswell at his CKM Infinity Studio. Marlon has also been performing on live streams and on drive in shows with the band Slightly Stoopid. In April, 2021 Marlon performed on his first regular live show since the covid 19 lockdown started to a sold out crowd in Humboldt County, California. More live shows are booking for him as the pandemic declines. Marlon Asher is ever on the rise.

The Rudians, Danceable Reggae from Salinas, California. We all found each other in this sacred valley. Our art tells stories of reflection, spirituality, love, and the struggles in our communities. We draw inspiration from Roots, Dub, and Dance hall and also Metal, Jazz, Hip Hop, and Spoken Word.