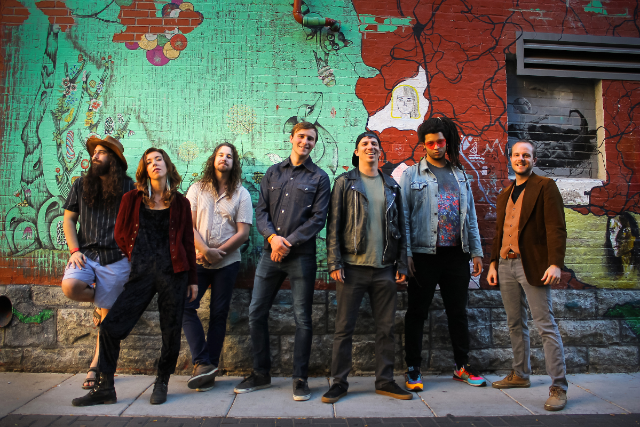 Until further notice, Moe's requires proof of vaccination OR a negative test within 72 hours of the show date. Per County mandate, masks are required indoors when not eating or drinking.

A band that refuses to be locked into a single genre, Boot Juice finds a sense of freedom in their ability to float from bluesy rock’n’roll to progressive bluegrass and back. Inspired by the likes of Railroad Earth and soulful harmonies of Creedence Clearwater Revival, Boot Juice curates a sound that is uniquely their own, resulting in a layered and dynamic live performance. Boot Juice has been kickin' around the west since 2016, leaving audiences happy, and dance floors sticky. The 7-piece band features electric and acoustic guitars, three vocalists, bass, drums, trumpet and alto saxophone. The band has its heart in Americana songwriting, with a rock’n’roll delivery that gets crowds moving. Boot Juice plays music that will attempt to bring you to the street corner, the river side, or the open highway.

The band has continued to produce new, interesting music that is hard to put a label on. It's been called a lot of things; Rock, Bluegrass, Blues, Folk, Country. Whatever you want to call it, they have found a sound that is uniquely their own, weaving 3 or more part vocal harmonies with a rocking backing band, and impressive lead guitar licks. Boot Juice released their debut LP album, Speaking in Tones, in May 2019 and followed in March 2021 with their second record, Shifting gears.

Alex Lucero and The Live Again Band
Originally formed in Oakdale, California in 2013, Alex Lucero & The Live Again Band is a 5-piece band crossing genres ranging from; Soul, Funk, Jazz, Americana and beyond. Band members age-range spans over 4 decades with generational talent led by lead singer Alex Lucero. The band has independently released five all original albums comprised of both studio and live performances. Alex Lucero & The Live Again Band have received incredible response across Northern California being played regularly on multiple radio stations and on permanent rotation on the well known KPIG 107 “oink” 5. With the steamrolling effect of success in late 2019 and 2020 (pre-pandemic), Alex and Band plan to continue their touring across California promoting their brand new album entitled “Opportunity”.
Please Note: This event is 21 and over. Any Ticket holder unable to present valid identification indicating that they are at least 21 years of age will not be admitted to this event, and will not be eligible for a refund.