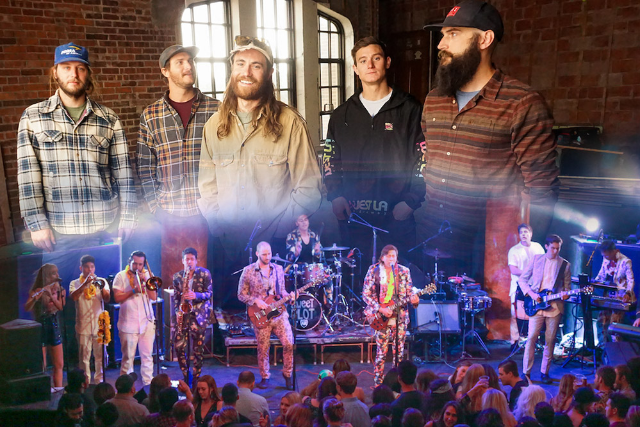 Born from the rich culture of the Colorado mountains, The Runaway Grooms are bringing a refreshing take on contemporary jam band music. With pocket grooves, syncopated rhythms, and expansive tones, the band captures elements of funk and psychedelic rock while simultaneously celebrating traditional songwriting roots of Americana music. Dueling guitar solos, 3-part harmonies, and a screaming lap steel guitar, combine to create a unique soundscape that takes listeners through an experiential musical journey.

The Colorado based band formed when frontman, Adam Tobin, met guitarist, Zac Cialek, at employee housing for a ski resort. The two were joined by drummer and long time friend, Justin Bissett, shortly after and formed the original lineup of the band. Bassist/vocalist, Zach Gilliam, and keyboardist, Cody Scott, joined the band in November 2019. The addition of the new members helped catalyse the evolution of the band’s sound.

The band released their debut album ‘Tied to the Sun’ in March 2020 , The release was immediately followed by the global Coronavirus pandemic during which the band continued to develop and write music together. The newly written music contributed to the Groom’s sophomore album, Violet Lane, set to be released October 2021.

Formed by musicians from multiple bands in the San Francisco Bay Area in 2014, Sweet Plot quickly arrived on stages across California and beyond. With their unique blend of funk, rock, soul and world music, Sweet Plot cooks up a phonic stew which never fails to energize a dance floor. Blazing guitar, jumping polyrhythms, screaming horns and powerful vocals all punctuate a vintage sound reministinate of the rock and funk of the 1970s, but with a not so subtle modern polish. Since 2016 the group has released four studio albums of original material with a fifth on its way in 2022. Keep an eye out for new music as the group gears up to hit the road again and release a string of new singles, the latest of which, "Tomorrow", will arrive on 1/14/22.