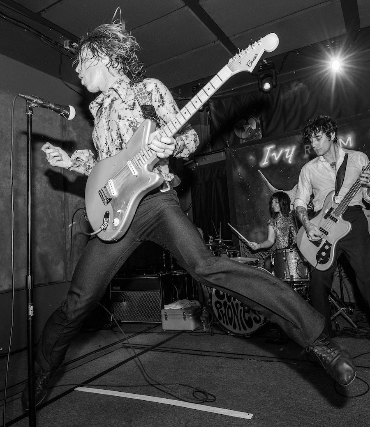 We're delighted to have THE SCHIZOPHONICS grace the stage with a wild, explosive live performance the world has come to know and love!

Lightspeed Testing will provide free testing from 7:30pm-9:30pm for this show. Testing is open to the public. No insurance required. Register in advance here.

Over the last few years, THE SCHIZOPHONICS have built up a formidable reputation around the world as an explosive live act. Tapping into the same unstoppable combination of rock 'n' roll energy and showmanship that fueled THE MC5 in the heyday of the Grande Ballroom, their wild live show is heavily influenced by artists like JAMES BROWN, IGGY POP, JIMI HENDRIX, LITTLE RICHARD, and THE SONICS. Singer/guitarist Pat Beers and drummer Lety Beers formed the band in San Diego in 2009 and have worked tirelessly since then, playing hundreds of shows around the globe and winning 7 San Diego music awards. In 2013 they were recruited as the backing/opening band for EL VEZ, which helped the band make a name for itself in Europe. Since then, they've played in fourteen countries, and supported tours by like-minded acts like ROCKET FROM THE CRYPT, LITTLE BARRIE, and THE WOGGLES and have opened for the DAMNED, HIVES and CAGE THE ELEPHANT. Shindig magazine described their live show "Like watching some insane hybrid of WAYNE KRAMER, JAMES BROWN, and the Tazmanian Devil".

Nobody’s Baby is a band that set out to make midcentury realism with a psychedelic nightmare backdrop. Everything is from scratch - from recording/producing to building their own guitar amps. Atmospheres of sludgy fuzz to tight harmonies. Wonder to hysteria. Mood swings and dead boyfriends. Blackout drunk Screamin Jay Hawkins. Buddy Holly post plane crash. But there’s no hero worship to be found here. The quartet write a letter to their musical idols. The note is written in vintage fuzz pedals, trashcan reverb and pounding cave dweller drums. The result is a death doowop funeral parade and everyones invited.