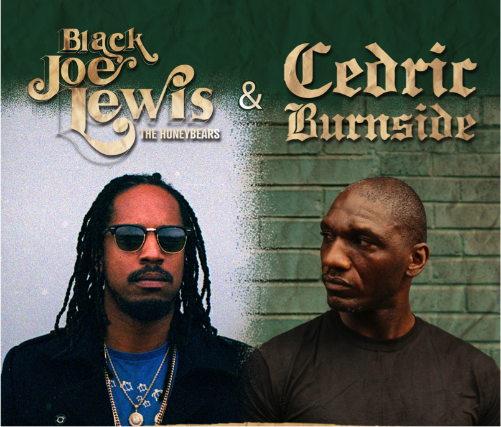 Moe's Alley is proud to present a (((folkYEAH!))) production with Black Joe Lewis and The Honeybears and Cedric Burnside!

Black Joe Lewis and The Honeybears
Black Joe Lewis is the realest motherfucker there is. When Covid sidelined his touring this past year, he started laying concrete to help support his baby mama and his kid. That’s fuckin’ real. When Joe and his band, the Honeybears, popped onto the national stage over a decade ago, many critics embraced him but still, there were some that maintained that they hadn’t paid their dues. Joe’s still here. Still going. Still cashing checks and snapping necks. The dues of hard work; the delirious heights of the industry as well as the disappointments and low hanging fruit. Through this all, Joe’s only honed his mastery over gut bucket blues guitar and his true voice. It’s a vital and distinctly American voice that never anticipated the attention he wound up receiving, never went looking for it either. It just started happening. The garage, the blues, the propulsive and synergistic live performances that inhabit the spaces of James Brown, Lightnin’ Hopkins, and the MC5…those things happened naturally from the very beginning and could only be accurately communicated in the live experience, not a press release or a slick brand campaign. Sharon Jones, Charles Bradley, Cedric Burnside and Lightnin Malcolm, The Dirtbombs, Detroit Cobras, the Strange Boys; these are some of the artists that Black Joe Lewis and the Honeybears shared countless bills with; almost a roll call of the most influential soul and garage bands of the last twenty five years.

Take one glance at the iconic tintype photograph which serves as the cover to his new album, Benton County Relic, and you know immediately that Cedric Burnside is the real deal. “When I first saw it, I thought I looked like an outlaw,” he laughs.

The 39-year-old still lives on several acres not far from the Holly Springs, Mississippi, home where he was raised by “Big Daddy,” his grandfather, the late singer/songwriter/guitarist R.L. Burnside whom Cedric famously played with, just as his own father, drummer Calvin Jackson, did. Cedric was literally born to the blues, more specifically, the “rhythmically unorthodox” Hill country variant which emerged from Mississippi, where he grew up surrounded (and influenced) by Junior Kimbrough, Jessie May Hemphill and Otha Turner, as well as delta musicians T-Model Ford and Paul “Wine” Jones.