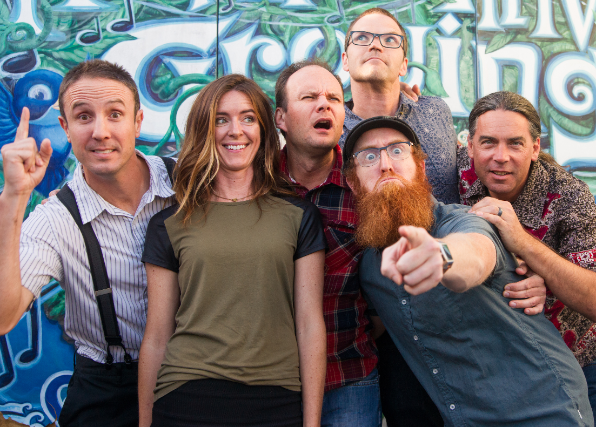 The one and only Coffee Zombie Collective will light up your soul, put a smile on your face and definitely get you dancing! Salinas' own The Rudians open the show with their own brand of reggae and soul.

Coffee Zombie Collective
Coffee Zombie Collective formed in 2010 as a loose group of sleep-deprived musicians playing their favorite lesser-heard songs alongside karaoke barn burner hits. The band has continued to evolve, mixing in their own originals alongside twisted acoustic reimaginings of contemporary pop hits such as Lourde's "Royals" and cult classics such as MotÃ¶rhead's "Ace of Spades." Coffee Zombie Collective takes the songs you love, or love to hate, and weaves them into medlies, or upside-down interpretations that always leaves audiences smiling. The band's high-energy stage performances whip audiences into a sing-along dance frenzy. The repeated on-stage mantra is "If you know the words, sing along. If you don't know the words, sing louder!" If you're at the show, you're part of the collective, and highly encouraged to contribute in the frisky, sweaty, ad-libbed sound explosion that is Coffee Zombie Collective. It's never the same show twice.

The band can be succinctly summed by a recent description of a Popeye's chicken sandwich "The salt, the fat, the sharpness, the softness "together, the elements of [Coffee Zombie Collective] are so perfectly balanced that they meld into one another to form a new, entirely coherent whole."

We all found each other in this sacred valley. Our art tells stories of reflection, spirituality, love, and the struggles in our communities. We draw inspiration from Roots, Dub, and Dance hall and also Metal, Jazz, Hip Hop, and Spoken Word.