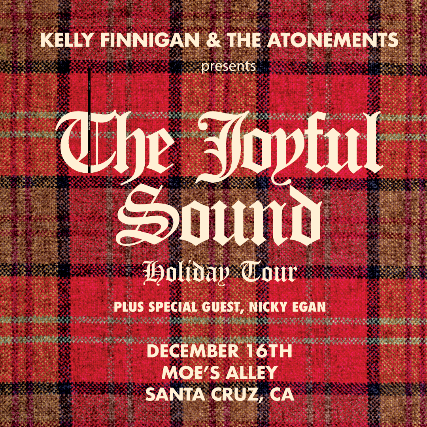 **Note: Until further notice, Moe's Alley requires proof of vaccination OR a negative test within 72 hours of the show for entry. Masks are recommended when indoors at Moe's Alley
Acceptable forms of proof:

Kelly Finnigan, lead singer of Monophonics the indie-soul trailblazers from Los Angeles, is steering the vision of modern soul music galvanized by Lee Fields and the late Sharon Jones and Charles Bradley.

Writing, recording, performing and producing his own material, Kelly Finnigan assembled the Atonements with members of Marvin Gaye's band and his own Monophonics players.

The resulting record on Colemine is a timeless collection underscored by a sense of community...raw and gritty, tender and emotive, lush and symphonic.

Nicky Egan
Nicky Egan is an accomplished songwriter and keyboardist who commands the stage with captivating energy. Dubbed a "soul songstress" by Phillyburbs.com, Egan grew up in a Philadelphia home where the sounds of Richie Havens, Bob Marley, Bonnie Raitt, and The Rolling Stones were frequently buzzing on the stereo. Upon receiving a scholarship to attend Berklee College of Music, Egan moved to Boston in 2006. She graduated with a degree in contemporary Writing and Production, worked with various visiting producers, showcasing many original pieces of work, and directed the Entrepreneur Action Team. Egan spent two years touring with funk band, Turkuaz, post college and released her first album, Good People, in 2011 when she moved to Brooklyn, NY.
Please Note: This event is 21 and over. Any Ticket holder unable to present valid identification indicating that they are at least 21 years of age will not be admitted to this event, and will not be eligible for a refund.