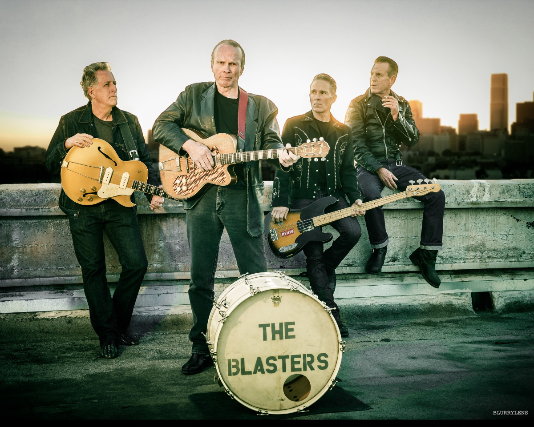 THE BLASTERS grew up in the southeast Los Angeles suburb of Downey, California under the tutelage of T-Bone Walker and Big Joe Turner to their emergence as central figures in the eclectic LA punk/rock scene of the early ‘80s to their current status as internationally-renowned influences in their own right, the Blasters have spent their lives exploring and expressing the deep and diverse musical legacy that is best described by the title of their first album: American Music.

A performance by today’s Blasters––vocalist-guitarist Phil Alvin, drummer Bill Bateman, bassist John Bazz, and guitarist Keith Wyatt––reflects influences that range from George Jones and Carl Perkins to Howlin’ Wolf, James Brown and Bo Diddley. The band’s 1980 debut album American Music (Rollin’ Rock) was a powerful collection of fresh, distinctive performances that shattered the artificial boundaries between blues, rockabilly, country, R&B and rock & roll. The next three albums for Slash/Warner Bros. (The Blasters, Non-Fiction, and Hard Line) increasingly featured the unique songwriting voice of original guitarist Dave Alvin as the band’s lineup expanded to include pianist Gene Taylor plus saxophonists Steve Berlin and New Orleans legend Lee Allen (“the man who put a saxophone in rock & roll”). As the Blasters’ fame grew, they began to draw accolades from artists as diverse as Bruce Springsteen, Eric Clapton and Queen, and in turn the band encouraged and supported still up-and-coming LA musical peers such as Dwight Yoakum and Los Lobos.

Blasters shows have been described as “a cross between Creedence and the Clash,” with a display of passion and energy only deepened by decades of experience. For all of the ways in which the world has changed in the past few decades, one thing is still guaranteed: the Blasters play American Music.