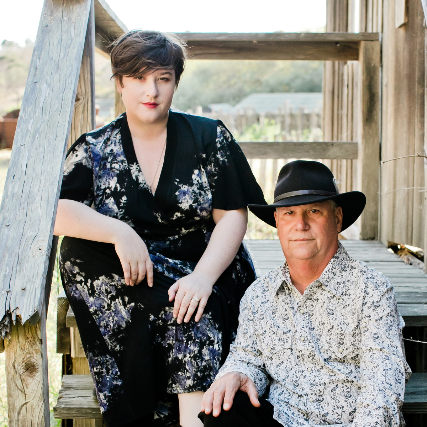 Wild & Blue is the California-bred father/daughter Americana duo of Steve and April Bennett, who take the time-honored tradition of family harmony into inspirational new territory. Steve writes insightful, personal songs, and he and April sing them with timeless emotional urgency.

Steve and April — who dubbed themselves Wild and Blue in honor of the classic John Scott Sherrill song of the same name — have been singing together for live audiences since April was a toddler. In adulthood, April's aching, expressive voice has emerged as a powerful vehicle for Steve's songwriting, which takes inspiration from vintage soul and R&B as much as it does country.

Restless, Wild and Blue's nationally charting debut album, was released in January 2021. It showcases a musical partnership that's deeply rooted in country music tradition, yet firmly contemporary in its emotion-charged lyrical stance. The music video for their hit single "Wedding Dress for Sale" has been featured on Ditty TV, The Country Network, Americana Highways, Taste of Country among others.

Bill Bentley of Americana Highways called Restless "as strong as anything released out of Nashville the past few years... the kind of album that could come out of left field and take it all the way home.”

Bad Maps
And out of the Santa Cruz mountains crawls Bad Maps, who’s sound goes far beyond what you would expect of their western style instrumentation. (Four string banjo, lap steel guitar, upright bass, guitar and drums) with country tinged songs injected with healthy amounts of soulfulness and indie rock weirdness, you just might be tricked into dancing along to Zachary Handl’s dark poetic lyrics.
Please Note: This event is 21 and over. Any Ticket holder unable to present valid identification indicating that they are at least 21 years of age will not be admitted to this event, and will not be eligible for a refund.