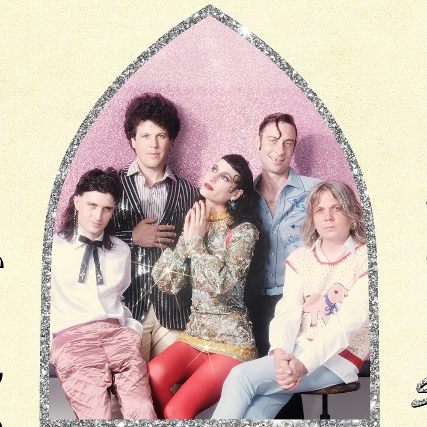 Kate Clover is a songwriter and musician from Los Angeles, California. From the local lineage of bands like X, Germs, and The Gun Club, to the glamorous destitution of the downtown streets, Clover is inspired by the city that raised her, exploring the intricacies of self-discovery, self-creation, and self-preservation in the place where dreams are born to die. With the live-wire energy and crackling force of defiant fists raised in the air, Clover’s music is the rallying cry of a natural born killer. Leading an ace band of rangy, rowdy boys, Clover cuts an electric figure--a next-gen underground hero for the would-be believers.

With Patti Smith and Iggy pop as her artistic North Stars, Clover mastered three chords and defected to art school, where she learned to play “Chinese Rocks” by Johnny Thunders, and wrote her first song. She cut her teeth playing in various projects but was determined to go solo, seeking independence and total control. In 2019 she parted ways with her former bands and steadily began to write new material. Early in that process she realized she needed a new start. In need of self-discovery and an escape from Trumps America she headed to Mexico City to write. She had planned on staying four days but ended up staying for four months and writing and recording her album with Brandon Welchez of Crocodiles. Upon her return to the US she assembled a band and quickly carved out a space for herself in the LA scene.  Earning a rep for explosive live shows, Clover spent 2019 hitting the road with Death Valley Girls, Crocodiles, King Dude and SadGirl, and recorded a duet with Dion Lunadon (A Place to Bury Strangers) that debuted on Henry Rollin’s KCRW radio show. After independently releasing her first single last year, Clover’s first offering of 2020 is a remix of “Channel Zero” by Carlos de la Garza (Cherry Glazerr, Bleached). Clover released her debut EP “Channel Zero” in May 2021.

With its massive power-chords and defiant rallying cry against mindless media and political puppets, “Channel Zero” is drenched in classic punk energy, with Clover’s snarling vocals leading the charge. It’s the first of several songs recorded at Vesubio Studios. The EP was co-written and produced by Brandon Welchez (Crocodiles) and features AJ and Johnny Davilla from Davilla 666. “I needed a new headspace creatively, and Mexico City felt like how Berlin must have felt in the late 70’s,” explains Clover. “Expatriates working on their art and collaborating with each other.”