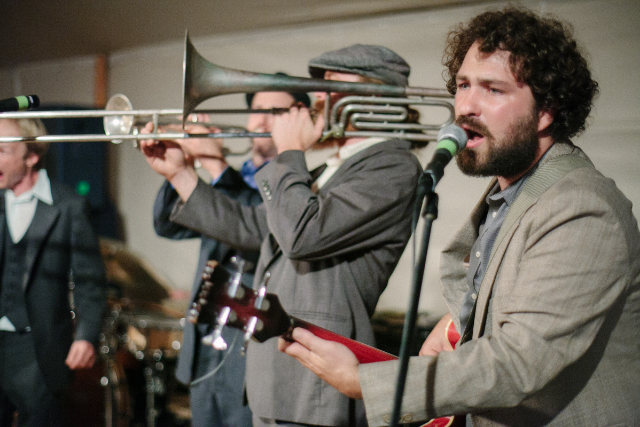 From classic, upbeat soul to psych-driven, heavy grooves, this double of Santa Cruz local bands will be a complete mind, body and soul experience!

Harry and The Hitmen

Harry and the Hitmen serve up classic Motown and Soul with jovial professionalism. But don't let the "suits" fool you, the band comes from an improvised rock tradition, and has years of experimentation behind their tight arrangements. Unearthing nuggets from the golden years of Motown and Stax records, the group also writes original “New Soul Classics”®.

Because all six members are multi-instrumentalists and avid improvisers, their concerts continue to evolve nightly. Perfectly suited for everything from stately weddings to far-out festivals, Harry and the Hitmen delivers a one-of-a-kind dance party wherever needed!

Mammatus has been conjuring up a heavy blend of riff laden, space trippin, proggy, hazy far out rock and roll for ten years now. Since forming in the shadows of the Santa Cruz Mountains of California in 2005, they've delighted the ears and minds of adventurous listeners around the world. Their wizard and dragon themed self titled debut LP became a cult classic among the stoner rock crowd, drawing rave reviews from music lovers who were mesmerized by the psychedelic jam sandwich of Sabbathy riffage, swirling kraut grooves, and thundering space drones. In 2007 Mammatus released The Coast Explodes, and continued their ascent into heaviness while introducing more prog into the mix and creating a blissful yet intense spiritual rock experience. They traversed North America, garbing themselves in bizarre floral wizard robes and waving redwood staffs foraged from Corralitos Creek, turning people on to their sound and leaving many a sore neck behind them. There was a period of hibernation between 2008 and 2012, spattered with sporadic bursts of energy when Mammatus would appear in select locations on the west coast playing shimmering spaced out hypno prog metal. They had lost themselves in the electronic fury of the mind, writing an album about the elation and confusion that the brain experiences from being overwhelmed by music. They emerged in 2013 with Heady Mental, an album embracing the weird, a hyperpipe of sonic haze.

Now Mammatus return with their fourth album, and their most ambitious to date. Sparkling Waters is a double LP featuring four multi-movement pieces, each designed to recalibrate the shanga array in your mind. In order to achieve the highest levels of sensatory clarity, the group enlisted Phil Manley (Trans Am, Life Coach) as their guiding light throughout the studio production. As a result these tracks shimmer with a far out, casual glow, like an aural reflection of a Risan steam pool.